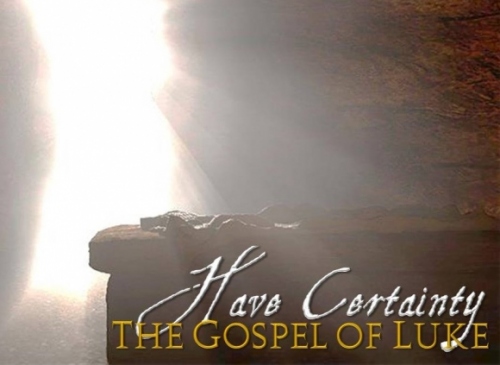 NOTE:   I hope you were challenged by the picture presented in this morning's sermon on Luke 16:19-31. I just wanted to amend a statement that I made at the very end of the sermon. I did not realize I said it this way until a couple people kindly pointed it out to me. I said something along the lines of "The GREAT reversal is that Jesus became the sinner on the cross that you might become the righteous, and the pure, and the holy before God, not on the merit not on the basis of anything in you but on the basis of His gift of grace given to you." So close, but a misstatement. That was imprecise. I should not have said Jesus became "the sinner." It is said that the Lord laid our iniquity on Him (Is. 53:6). It is said that He bore our sins in His body on the cross (I Pet. 2:24). It's even stated that God made Him who had no sin to 'be sin' for us that we might become the righteousness of God (II Cor. 5:21). All this is to the glory of our Savior. But for all this, the Bible does not say he became "the sinner." That would imply that he was the one who had committed the sin. Jesus never ever once committed sin. He was pure and holy, an unblemished sacrifice. Our sins were imputed to him. It can be said that God released judgment and wrath upon the Son "as if he sinned" because he was there as a substitute and he took our iniquity. But it should not be said that Jesus was "a sinner" or "the sinner" even on the cross. Hope this makes sense. Needed to get it off my chest. Soli Deo Gloria. Pastor Jeff